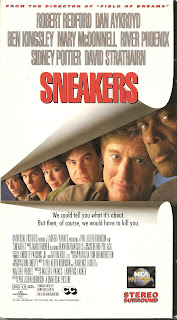 My apologies for taking a bit of a break from posting new reviews. I’m currently making my way through 16 episodes of the British sci-fi/police procedural TV series Life on Mars. Quite honestly, it’s television at its finest (I would rank it up there with The Wire) – check it out.

Blurb From the VHS Jacket: “Robert Redford leads an all-star cast in one of the most satisfying films of the year!”

What Did I Learn?: According to Ben Kingsley, “IT’S ALL ABOUT THE INFORMATION!!”

Really?: 1) So, Ben Kingsley’s character made a trillion dollars by computerizing organized crime, and he wants to create a communist society? And nobody receives the slightest punishment for *ahem* killing several people? 2) Apparently, it’s ok to use IT to bankrupt the Republican Party, but one shouldn’t even think about messing with the Federal Reserve or the CIA.

Rating: One of the most satisfying films of 1992? Um...not by a long shot. Sneakers is an ok comedy/suspense movie, but it’s a little too long, Sidney Poitier and Ben Kingsley aren’t given much to do, and the ending is pretty lacklustre. Overall, meh. 6/10 stars.