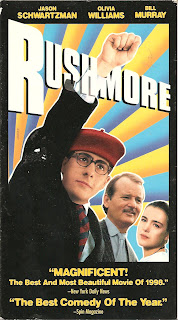 
Blurb From the VHS Jacket: “Rushmore is the story of a gifted, rebellious teenager named Max Fischer (Jason Schwartzman), a 10th grader at elite Rushmore Academy. Editor of the school newspaper, captain or president of innumerate clubs and societies, Max is also one of the worst students in the school, and the threat of expulsion hangs permanently over his head.”


What Did I Learn?: 1) If your girlfriend thinks you don’t have a wild and crazy side, spend $8 million and build an aquarium for the local private school – that’ll impress her! 2) You never want to piss off somebody who knows how to handle bees.


You Might Like This Movie If: You see nothing wrong with combining physical activity with a few cigarettes and a healthy whisky-and-soda.


Really?: 1) Doesn’t a middle-aged, multi-millionaire steel magnate have better things to do with his time than hang out with a 15-year old? 2) If a cute Asian girl followed me around everywhere, I’m pretty sure I’d remember her name.


Rating: Rushmore is a very clever, funny and magnificently-written (Max’s pop culture-inspired plays are priceless) coming-of-age film. Bill Murray is great, but Schwartzman delivers a brilliantly-believable performance as the precocious Max. While I’d love to give it a perfect score, I can’t, only because the script has a few too many cringe-inducing awkward scenes for my taste. 9/10 stars.