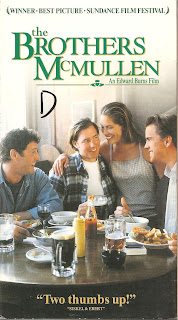 (Belated) St. Patrick’s Day Movie #3 [Click the link to read my review of the similar Edward Burns family drama, She’s the One - there are a lot of overlapping characters and situations]


Synopsis: It's 98 minutes of Irish-American blokes banging hot chicks and then complaining about how the women in their lives don't understand them. Oh, boo hoo...


Blurb From the VHS Jacket: “Sometimes the best friends are those you’ve known your whole life. Three brothers from Long Island try to reconcile their lives and loves in this charming romantic comedy which won Best Picture at the Sundance Film Festival.”


What Did I Learn?: Irish-Americans still think JFK was a great President.


Really?: 1) How many fresh-out-of-college guys would turn down a fully-paid-for apartment and a job from their girlfriend’s dad? 2) So wait...the quasi-religious, former altar boy youngest brother: a) dates a Jewish chick, b) later hooks up with a pro-choice activist, and then c) somehow thinks the latter will be sympathetic after she hears his ex-girlfriend had an abortion? Really?


Rating: The Brothers McMullen was Edward Burns’ first successful film, and it’s obvious he really tried to swing for the fences in every scene: it’s an endless series of confrontations, and characters opining about the mysteries of men and women. The quality of film Burns used was rather poor (it all looks rather washed-out), but TBM does have some interesting things to say, and it is worth a viewing. 7/10 stars.