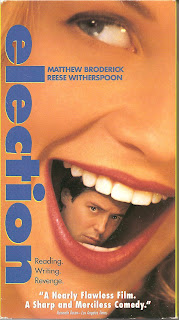 
Blurb From the VHS Jacket: “Reese Witherspoon plays Tracy Flick, a straight-A go-getter determined to be president of Carver High’s student body. Popular teacher Jim McAllister (Broderick) decides to derail Tracy’s obsessive overachieving by recruiting an opposite candidate. Mr. M. never imagines that stopping Tracy is like trying to put toothpaste back in the tube.”


What Did I Learn?: If you’re going to rig a student election, put any legitimate ballots in your pocket and dispose of them later – for the love of God, don’t throw them in the trash can!


You Might Like This Movie If: You believe every election should matter as much as the Presidential race at Carver High.


Really?: 1) Reese Witherspoon is obviously an attractive lady, but is she really the seductress type? Do male high school teachers really go for the super-perky, overachieving, cute-but-not-hot girls? 2) Why does Mr. M. give a flying crap about who becomes President of the student council?


Rating: Election is a brilliantly-written and well-acted dark comedy. My only complaints would be that much like Andy Garcia in the Ocean’s Eleven remake, Witherspoon is unlikeable but never becomes much of a villain, while the story veers off into Broderick’s half-assed attempts at an extramarital affair. 8.5/10 stars.