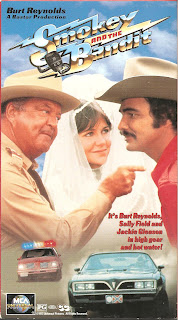 
Blurb From the VHS Jacket: “[Burt] Reynolds is the Bandit, a king-of-the-road trucker who accepts the ultimate challenge: pick up a truckload of Coors beer in Texarkana – the closest place it can be legally sold – and haul it cross-country to Atlanta in 28 hours. The reward? $80,000! The result? The wildest series of car crashes ever filmed!”


What Did I Learn?: Folks in Georgia will pay top dollar for 400 cases of lukewarm piss-beer.


You Might Like This Movie If: You've always dreamed of driving Eastbound and Down in a big rig truck. (Oops – wrong clip!)


Really?: 1) I had a hard time believing a Mississippi state trooper would accept a profanity-laden tongue lashing from a Texas sheriff 700 miles outside his jurisdiction, and then allow him to continue driving a vehicle that isn’t road-worthy. 2) Ok, I can see the Bandit as a folk-hero for the CB radio crowd, and maybe some of them could assist by providing information and diversions, but who was that Japanese guy who screamed “Banzai!” and then smashed Jackie Gleason’s car door off its hinges? That was just silly.


Rating: Smokey and the Bandit isn’t a great movie by any stretch of the imagination, but it is fun if you put your brain on ‘pause’ and enjoy the banter and car crashes. 7/10 stars.