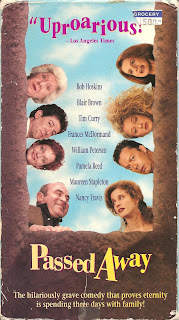 
Blurb From the VHS Jacket: “Featuring a hysterically funny all-star cast, here’s an outrageous comedy that proves eternity is spending three days with family! When patriarch Jack Scanlan suddenly passes away, he finally gets his offbeat family back together! But now as this crazy, unpredictable mix of relatives are forced to spend an entire weekend together under one roof, plenty of uproarious surprises lie ahead! Dealing with the grief is easy, dealing with each other, hilarious!”


What Did I Learn?: Kids, if your Dad informs you that your grandfather has just passed away, please think of something a bit more sensitive to say than: “Back off!”


You Might Like This Movie If: You’re a huge Bob Hoskins fan, and you want to see the role that propelled him to bigger and better things.


Really?: 1) Maybe a fool would throw a surprise party for a man who just returned from the hospital after a heart attack, but would an entire office go along with the idea without somebody saying: “you know, perhaps this isn’t such a good idea...?”. 2) How many men would seriously think about banging their father’s mistress? That’s seriously creepy.


Rating: When I watched Passed Away in the theatre twenty years ago, I hated it – I found it dull and totally unfunny. Two decades later, I realize I was a little harsh in my judgement; it’s not a great film, or even a particularly good one, but Passed Away boasts some good performances (Tim Curry is at his snooty best, and William Petersen is rather funny as the good-looking-but-dumb younger brother of Bob Hoskins) and a few laughs, and it isn’t nearly as terrible as I remember it being. How’s that for high praise? 6/10 stars.