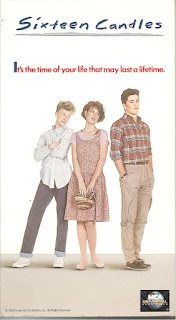 Molly Ringwald Film Fest Movie #1 (Click the link to read my review of Spacehunter: Adventures in the Forbidden Zone – a film Molly probably doesn’t include on her CV)


Blurb From the VHS Jacket: “It’s Samantha Baker’s Sweet Sixteen and no one in her family remembers the important occasion. John Hughes, the writer of National Lampoon’s Vacation shows how coming-of-age can be full of surprises in this warm-hearted teenage comedy starring Molly Ringwald.”


What Did I Learn?: Grandparents are crude, uncool and insensitive fools who are best avoided.


You Might Like This Movie If: You know that it is sometimes for the best if your family doesn’t remember your birthday.


Really?: I love this film, but come on... 1) parents and grandparents don’t forget birthdays – they just don’t; 2) there’s no way in the world that Jake’s prom-queen girlfriend would ever fall for the much-younger Geek; 3) Wouldn’t Sam’s parents have realized her older sister was in no condition for a wedding ceremony after downing four muscle relaxant pills(!), and asked the minister to postpone the ceremony for an hour or so?


Rating: Sixteen Candles is an odd movie in the sense that it’s both a dated product of the early 1980s (There’s no way Gedde Watanabe’s portrayal of Long Duk Dong would make it into a modern-day remake, and I wonder: did middle-class, WASP Americans really dislike “bohunks” in 1984?) and a timeless story about unrequited love. The film is still funny, and Anthony Michael Hall nearly steals the show as the slimy-yet-likeable Geek, but I do have one complaint. Sam (Molly Ringwald) is the protagonist, yet she often fades into the background, and isn’t terribly proactive – she doesn’t do very much to win Jake’s affections. BTW: watch for an early performance from John Cusack. 8.5/10 stars.