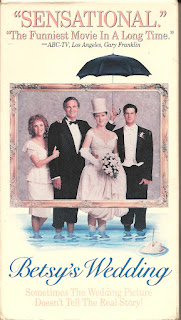 Molly Ringwald Film Fest Movie #2 (although this is much more of an Alan Alda flick – Molly basically walks through it, acting “quirky”)


Blurb From the VHS Jacket: “Like Parenthood and Moonstruck, Betsy’s Wedding is a funny, feel-good movie about a wonderfully eccentric family and their hilarious trials and tribulations – it’s about everything but their daughter’s wedding!”


What Did I Learn?: ABC-TV’s Gary Franklin, the guy who called Betsy’s Wedding “sensational” and “the funniest movie in a long time”, might very well be the world’s worst film critic.


Really?: I realize Anthony LaPaglia is playing a gangster (abeit an extremely polite, musical-comedy gangster), but not many men would repeatedly spend their days at a construction site wearing expensive, double-breasted suits, and not many mobsters would fall head-over-heels for a female police officer.


Rating: Ugh. Betsy’s Wedding is like a meal at the Olive garden: bland, inoffensive and forgettable. It’s not funny enough to work as a comedy, and not clever, poignant or meaningful enough to work as a drama. Apparently, Alda based BW on his own daughter’s wedding, and then wrote, directed and starred in it (meaning I think he bit off far more than he could chew). I can’t recommend this movie. 5/10 stars.