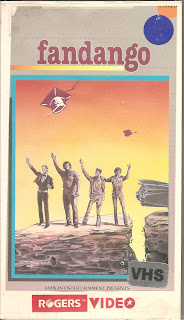 Synopsis: Steven Spielberg tries hand at executive producing character-driven, coming-of-age road movie before removing name from the end credits. (Maybe he thinks he should have filmed E.T. chugging a bottle of tequila in the Cadillac?)


Blurb From the VHS Jacket: “College is over, real life is about to begin. And the Groovers, beer-guzzling University of Texas roommates, find that breaking up is hard to do. It’s the summer of ’71, the Vietnam war rages half a world away and the Groovers have to make some decisions.”


What Did I Learn?: Attaching a steel cable from your Caddy to a moving train can produce unforeseen consequences.


You Might Like This Movie If: You’ve always wanted to commune with nature during a scenic, leisurely drive through the Lone Star State.


Really?: 1) The boys spend their last dollars, and nearly destroy their car in order to open a bottle of warm champagne?! 2) Apparently, you can organize a wedding and reception – totally at the last minute – by depending on the kindness of strangers.


Rating: Fandango isn’t a terrible film, but it’s not funny enough to be a Hangover/Porky’s type of comedy, and not smart enough or true-to-life enough to be compared to something like Breaking Away, or Stand By Me. While Kevin Costner provides a memorable performance as a wild-and-crazy guy (Judd Nelson, on the other hand, seems to be channelling a constipated Brainy Smurf), the plot and dialogue feel artificial and contrived. Let’s call it an interesting misfire – check it out if it’s ever on TV. 6/10 stars.