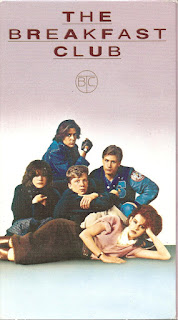 
Blurb From the VHS Jacket: “To the outside world they were simply the Jock, the Brain, the Criminal, the Princess, and the Kook, but to each other, they would always be The Breakfast Club.”


What Did I Learn?:  Very few men appreciate having their attire compared to Barry Manilow’s.


You Might Like This Movie If: You enjoy watching iconic characters create mischief in a library. (Ha – and you thought I was going to post this).


Really?: 1) So, Allison (Ally Sheedy) signed up for an all-day Saturday detention because she had nothing else to do?!? Why didn’t Mr. Vernon send her home? 2) Come to think of it, doesn’t Vernon have better things to do with his free time than to babysit John Bender (Judd Nelson) for two months of Saturdays? Wasn’t Vernon also punishing himself when he handed out that battery of detentions? 3) I’m not a teacher, but I have a strange feeling most high school hooligans aren’t nearly as articulate or self-aware as Bender.


Rating: It’s tough for me to rate The Breakfast Club, as it’s still a cultural cornerstone for my generation. The movie is a little improbable (would these kids really become best of friends after only nine hours? I doubt it) and stagey at times, but it’s also funny, powerful and well-written. Nearly everyone can relate to at least one of the characters, and even a hard-ass like Vernon is shown to have a human side. While certain 1980s teen comedies are now hopelessly dated, The Breakfast Club is just as watchable and timeless (well, the pot-smoking scene seems a bit silly) as it was in 1985. 9/10 stars.