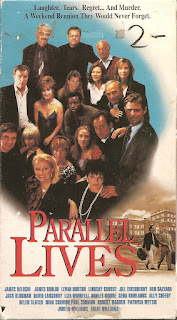 Synopsis: 19 B-movie actors realize they need to get new agents.


Blurb From the VHS Jacket: “After five years of planning, Millbank College finally welcomes back its graduates at a weekend reunion bash. The Friday night party quickly becomes a place for the group to renew old rivalries and re-establish friendships. The weekend is filled with confrontations and reconciliations, party games, panty raids and old college traditions...But, when a murder is committed, the good times come to an abrupt end.”


What Did I Learn?: If an older guy (Ben Gazzara) shows up at a frat reunion with an expensive sports car and a bimbo girlfriend about 30 years his junior, the chances are pretty good he’s going to be a real dick.


You Might Like This Movie If: You enjoy watching Jack Klugman interact with a bunch of... young punks.


Really?: I had a bit of trouble believing a 30-something virgin who looks like Helen Slater (meaning she’s probably saving herself for the right guy) would give it up for a one-night-stand at a frat reunion party.


Rating: Parallel Lives is a huge disappointment. I mean, you have an amazing cast (everyone from LeVar Burton to Ally Sheedy to Paul Sorvino), and yet the movie never develops any of their characters, and the plot (such as it is) is nearly non-existent. While it was nice to see Dudley Moore and Liza Minelli reunite after the Arthur films, and there are a few laughs here and there, I can’t recommend this film. Apparently, the actors improvised most of their dialogue – maybe somebody could have axed Matthew Perry’s pointless cameo and invested in a script? 5/10 stars.