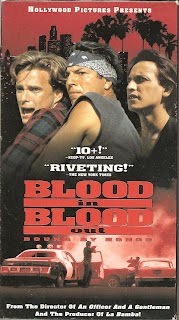 
Blurb From the VHS Jacket: “Now, from the director of An Officer and a Gentleman and the producer of La Bamba comes Blood In...Blood Out – a critically acclaimed modern-day epic. Within the rich and colorful Chicano culture of East Los Angeles, three cousins raises as brothers fiercely live by a generations-old tradition of family – a power stronger than law...a force deeper than friendship.”


What Did I Learn?: If you shoot your cousin’s lower leg clean off and then send him back to jail for armed robbery, there’s a very good chance he won’t be terribly receptive if you ask him for a favour afterwards.


Really?: I had a bit of trouble believing a graffiti mural in a deserted reservoir would remain unmolested for ten or more years.


Rating: Clocking in at 180 minutes(!), Blood In... Blood Out is a loooong movie that’s marred by mediocre writing and some very obvious dialogue (if you want to establish that Character A doesn’t like Character B, there are smarter ways of doing so than getting Character A to scream: “I don’t like you!”). Not a great film, but it does showcase some early performances by Ving Rhames, Delroy Lindo and Billy Bob Thornton. 6.5/10 stars.