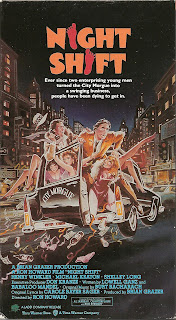 
Blurb From the VHS Jacket: “Ever since two enterprising young men turned the City Morgue into a swinging business, people have been dying to get in.”


What Did I Learn?: Apparently, the New York City Morgue only has two people on duty during the night shift, and not many New Yorkers die after the sun goes down.


Really?: 1) The main purpose of a pimp is to offer protection and collect cash if the john doesn’t want to pay. Chuck (Winkler) and Bill (Michael Keaton) only provide the girls with a telephone service, investment advice and rides in the morgue’s hearse. 2)  It’s kind of funny – and convenient -  how Chuck’s fiancée more-or-less disappears mid-way, only to reappear for one memorable scene at the end.


Rating: Night Shift is an enjoyable, yet nearly forgotten comedy from the very early 1980s; New York was still a pretty dangerous place, Henry Winkler was riding high on Happy Days, Shelly Long had just started on Cheers, and this film was Michael Keaton’s breakthrough role. The film boasts great chemistry, decent laughs, and a nice message about taking a chance once in a while. 8/10 stars.