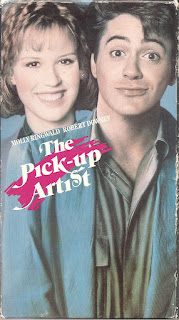 
Blurb From the VHS Jacket: “Make-out Master Robert Downey Meets his Match in Molly Ringwald. (Color, 1987) He’s the kind of guy who won’t take no for an answer from any woman, not even if it means losing his job, being perpetually broke or facing the blunt end of a boyfriend’s gun!”


What Did I Learn?: Apparently, you can park your car anywhere you want – even right in the middle of the street – as long as you place a fake parking ticket under the windshield wipers.


Really?: 1) Did anyone stop to think that even more gambling might not be the best way to pay off a gambling debt owed to gangsters? 2) So wait...Robert Downey Jr. is basically a sex addict, and he loses interest in further conquests simply because Molly uses him for sex (I really didn’t need to hear the audio, by the way!) and then doesn’t want to give him her phone number? 3) I had no idea it’s possible to charm a subway mugger by singing “Blue Suede Shoes”.


Rating: The Pick-Up Artist probably marks the beginning of Molly Ringwald’s downward career spiral. While it was certainly interesting to watch her and Downey interact with Danny Aiello, Dennis Hopper and Harvey Keitel(!), the script is convoluted, the film isn’t particularly funny and I got tired of watching Downey chasing Molly like a lunatic. 6/10 stars.