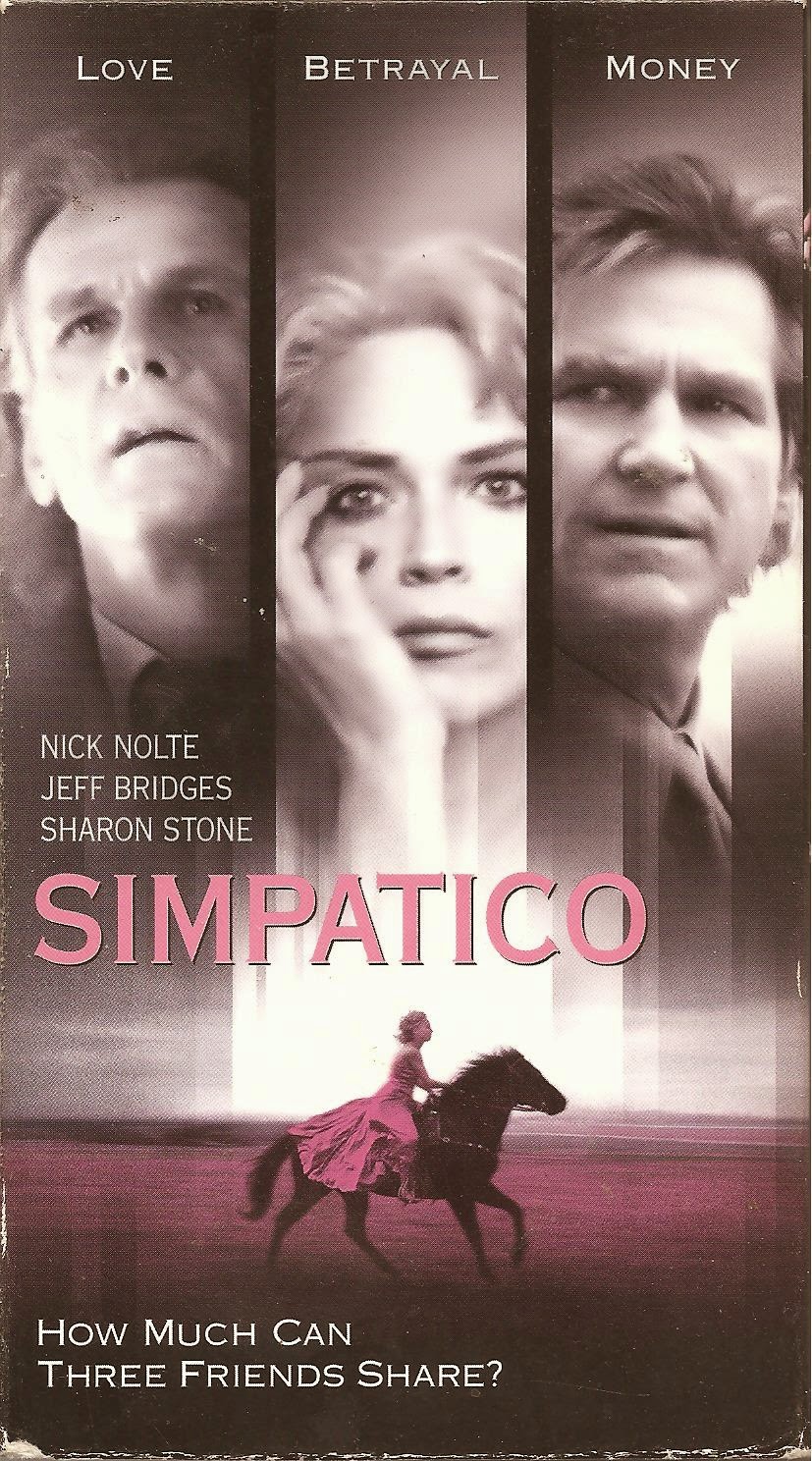 
Blurb From the VHS Jacket: “Vincent (NICK NOLTE) and Lyle (JEFF BRIDGES) were once the best of friends – training thoroughbred horses in 1970’s California, tearing up the highway in a ’58 Buick, spending nights around a campfire, dreaming about the future. Seduced by the highstakes world of horseracing, they plan the perfect scam. In the process, they destroy an innocent man’s life and the friendship of a lifetime.” [Ok, I’m pretty sure that “highstakes” isn’t a real word, and the guy they ruin is hardly “innocent”]


What Did I Learn?: Gents, ALWAYS keep your wallet in your pants pocket, and with you at all times.


You Might Like This Movie If: You want to see a clean-cut, professional guy live in squalor... and you love anything named "Simpatico".


Really?: 1) So wait, Carter (Bridges) is stuck on the other side of the country without his wallet, and no money, and he throws away his cellphone – his only means of communicating with his people back in Kentucky? Gee... that’s smart. 2) So, um... did the Director, or the casting people ever realize that the actor who plays the young Vincent (Shawn Hatosi) looks more like Bridges than Nolte? 3) Hold on.... Carter gets his people to wire Cecelia (Catherine Keener) some money and an airline ticket and he doesn’t join her in going back to Kentucky? He chooses instead to stay in Vincent’s dumpy apartment and smell the alfalfa in the distance? 4) Hmm.... the impending sale of Simpatico the horse doesn’t really impact on the plot, does it?


Rating: On paper, Simpatico should be a winner; I mean, how can you go wrong with Nick Nolte, Jeff Bridges and Sharon Stone, along with Catherine Keener and Albert Finney (who delivers a great performance, by the way) in supporting roles? Well, Simpatico went very, very wrong, and it is a bad movie. Leaving aside Stone’s wretched over-acting (the scene of her blowing up at Nolte's character is awful), the film’s biggest problems are that none of the three characters are remotely likeable, and I didn’t believe they would behave or develop the way they do. Don’t bet on this philly! I cannot recommend this movie. 4/10 stars.


Would It Work For a Bad Movie Night?: No, but take a drink every time a shouting match erupts.