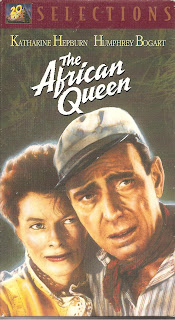 Blurb From the VHS Jacket: “Filmed in the African jungle John Huston’s legendary World War I classic, which earned HUMPHREY BOGART a Best Actor Oscar is an entertaining mix of romance, comedy and adventure.”

What Did I Learn?: It’s unwise to physically shove a German officer as his men are burning down your adopted village.

Really?: 1) Bogie’s Canadian? Was Brooklyn, New York a suburb of Toronto back then? 2) Funny how the missionaries learn about the outbreak of WWI from Bogie and then a band of German soldiers march into their village maybe five minutes later. 3) So wait – out of kindness, Bogie agrees to transport Hepburn, and she bosses him around? And he agrees to her idiotic plan to float down a dangerous river and then blow up a German warship even though there are many chances of getting killed, and it would mean the end of his livelihood? 4) If some Bible-thumping dame poured all of my gin into the river, there’s a very good chance I would throw her overboard immediately afterwards.

Rating: The plot of The African Queen is a bit silly, and somewhat difficult to believe at times (see “Really?”), but the movie is a charming and fun adventure, and Bogart is amazing as the scrappy, and decidedly uncool Charlie Allnutt. Watch this movie for the interplay between Bogart and Hepburn, but don’t take the storyline too seriously. 7.5/10 stars.