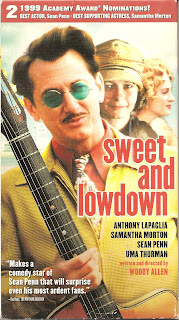 
Blurb From the VHS Jacket: “In the 1930s, Emmet Ray ruled as the second greatest jazz guitarist in the world. But offstage, and particularly in regards to his relationship with women, he was the undisputed king. Academy Award-nominee Sean Penn stars in this richly textured comedic portrait.”


What Did I Learn?: Generally speaking, chicks don’t like to leave glamourous nightclubs in order to watch trains or shoot rats at the dump.


You Might Like This Movie If: You know that Sean Penn is obviously a great actor, because he would never behave like such an obnoxious idiot in real life.


Really?: I realize Ray is supposed to be an insensitive, selfish jerk, but would he really reveal his attitude towards women (“love ‘em and leave ‘em”) right in front of his new girlfriend? (I also realize the film is supposed to a bit quirky, so I’m not even going to mention the scene of Ray falling through a ceiling into a room full of counterfeit money).


Rating: Sweet and Lowdown is my favourite type of Woody Allen movie: one in which he either doesn’t appear, or basically makes a cameo appearance. The film is funny and well-written, and Sean Penn provides a bravura performance as the talented-yet-loathsome Emmet Ray, but it wears thin after awhile. It’s tough to watch a self-destructive, unlikeable turd alienate everyone in his life. 7.5/10 stars.