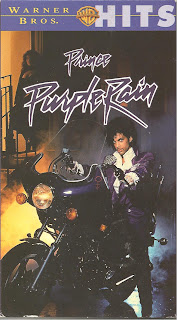 You may notice I have added an additional line to this review: “Would It Work For a BAD MOVIE NIGHT?” You’re only going to see this question in reviews of movies I can’t recommend because I want to be fair to them: some films are absolutely God-awful, but they’re fun God-awful (I’m looking at you, Showgirls). My friends and I have enjoyed many an evening subjecting sub-par movies to well-deserved ridicule over pints and pizza.
Synopsis: Foppish weirdo with purple motorcycle pursues leather-clad starlet.


Blurb From the VHS Jacket: “Take a richly-human story of survival and triumph, a now soundtrack by the hottest bands around and the startling premise and musicality of rock superstar Prince – the man who lived the music – and you’ve got what may be in Rolling Stone’s words ‘the smartest, and most spiritually ambitious rock-n-roll movie ever made.’”


What Did I Learn?: Prince can’t act, even when he pretty much plays himself.


Really?: 1) Morris and his idiot henchman/best buddy decide to use the word “what” as a password? 2) I had a bit of trouble believing Appollonia would be so-forgiving-so-soon after Prince tricks her into jumping into a lake of freezing water. 3) So wait...Prince’s mom shoots his abusive father, and there’s later a scene of her at his hospital bedside? How did she get out of jail, and why would anyone let her into the hospital?


Rating: Purple Rain begins with a triumphant performance of “Let’s Go Crazy” and then plummets downhill, fast. What a mess...I happen to like Prince’s early music, but this film is simply atrocious. The acting sucks (except for Morris Day of “The Time”: he’s the funniest and least threatening on-screen villain since Francis from Pee Wee’s Big Adventure, and he easily steals every scene he’s in), the storyline is practically non-existent, and Prince’s character is a selfish, at-times violent (he strikes his girlfriend on two occasions) and rather unlikeable jerk. I cannot recommend this movie. 4/10 stars.


Would It Work For a BAD MOVIE NIGHT?: Yes.