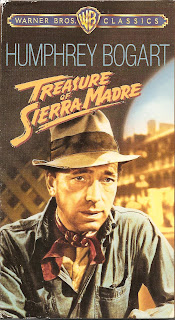 Bogart Film Fest Movie #3 (Note: this film is also known as “Treasure of Sierra Madre”, as the VHS jacket indicates)


Blurb From the VHS Jacket: “Pure cinematic gold! This triple Academy-Award winner well deserves its status as a renowned classic... Humphrey Bogart, Walter Huston and Tim Holt play a trio of Americans on the bum in 1920s Tampico. Pooling their resources, they strike off into the mountains of Mexico in search of gold. Hounded by jungle Indians, a fortune-hunting Texan (Bruce Bennett) and cold-blooded banditos (led by Alfonso ‘I don’t have to show you no stinkin’ badges’ Bedoya), they finally must confront the most dangerous adversaries of all... themselves.”


What Did I Learn?: Don’t ever go into business with a paranoid whackjob.


You Might Like This Movie If: You’ve always wanted to know where this joke (see 04:30), and this joke came from.


Really?: 1) Mexican bandits can’t recognize bags of gold dust? Oh, come on... 2) So wait, Curtin (Tim Holt) saves Bogie’s life twice (once from a cave-in, and again from a gila monster) and he’s still convinced there’s some plot to kill him and grab his cut? I guess that could happen, but really...?


Rating: The Treasure of the Sierra Madre is a thoughtful, yet exciting action movie (it’s almost a Western) with plenty of twists and turns, as well as two excellent performances from Bogart and Walter Huston. My only complaint would be that I had some trouble believing Dobbs (Bogart) would take a heel turn after Curtin and the old man saved his life a number of times, but I guess we can chalk that one up to gold fever. 9/10 stars.