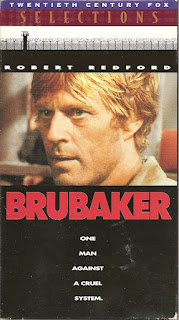 Synopsis: There ain’t no glamour in dropping the hammer on a corrupt slammer


Blurb From the VHS Jacket: “Robert Redford stars in this potent drama based on the real life story of Tom Murton, the prison superintendant who rocked Arkansas politics when he exposed scandalous abuses and murders in a state prison. Posing as a new prisoner, Brubaker discovers vast corruption in a state penitentiary before revealing himself to be the new warden.”


What Did I Learn?: Nobody wants to receive a chocolate prune cake as a bribe.


Really?: 1) Robert Redford poses as a prisoner, and nobody lays a finger on him even though other prisoners get raped and he isn’t a gang member. 2) A prisoner tells Brubaker (Redford) he literally knows where all the bodies are buried, and Redford replies that he’ll take a look tomorrow morning? Gee..what are the odds that dude will survive the night? 3) A prisoner escapes, and instead of say...oh, I don’t know...calling the cops or the state troopers, Brubaker arms several prisoners (albeit trusted ones) with shotguns, and they leave the prison grounds to hunt the man down in a nearby town.


Rating: Brubaker is a gritty, realistic and incredibly engaging film about an idealistic prison warden’s attempt to clean up a thoroughly corrupt hell-hole. I like this movie, although the ending is a real downer and Henry Brubaker never seems to learn that whenever he insists upon doing the right thing (rather than the smart thing), somebody always seems to get hurt. 8/10 stars.