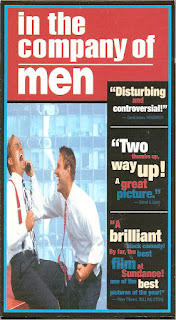 Synopsis: It’s like a low-budget Fight Club, except there aren’t any special effects, and Tyler Durden is an ass-kissing corporate climber instead of a terrorist.


Blurb From the VHS Jacket: “Chad (Aaron Eckhart), furious about the way women are ruining his man’s world, enlists his wishy-washy co-worker (Matt Malloy in a callous plan to date then dump a vulnerable secretary (Stacy Edwards). Both horrifying and hilarious.”


What Did I Learn?: Marketing backstabbers really love to wear crisp, white dress shirts – even when they’re at home, watching TV.


You Might Like This Movie If: You know that men can get weird ideas when there aren’t any women around.


Really?: 1) Hold on...Howard accidentally hits on the wrong chick, she accepts his invitation to grab a drink, and he then promptly forgets about her? Come on... 2) I can maybe understand Chad and Howard agreeing to use a chick for meaningless sex, but for both of them to go along with a plan to deliberately hurt a vulnerable girl? I’m not sure I buy the premise of the movie.


Rating: I have mixed feelings about In the Company of Men. On the one hand, a pre-Thank You For Smoking Aaron Eckhart delivers an amazing performance as one nasty corporate Iago, and ICM demonstrates that you don’t need a lot of money to make a movie that’s interesting, and compelling. On the other hand, neither Chad nor Howard are terribly likeable, and the subject matter makes for a rather dark (and not entirely believable) comedy. 7/10 stars.