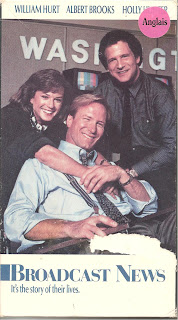 
Blurb From the VHS Jacket: “Broadcast News is a romantic triangle in a fresh and fascinating setting. It’s the newest film masterpiece written, produced and directed by the Academy Award winning director of ‘Terms of Endearment’ James L. Brooks.”


What Did I Learn?: Good-looking and shallow will always triumph over smart-but-socially-awkward. (Then again, I already knew that).


You Might Like This Movie If: You know that putting a network newscast together isn’t easy, and you’ve always wanted a behind-the-scenes look.


Really?: I’m still not entirely sure why Aaron (Albert Brooks) would assist Tom with facts and arguments during a live, Breaking News broadcast instead of letting him fail from his own mediocrity.


Rating: I wanted to like Broadcast News more than I did. James L. Brooks is an intelligent filmmaker, and this movie is a smart, well-written satire of the late 1980s network news biz. Still, Broadcast News is only sort-of funny, and its biggest problem is the main love triangle plot between Holly Hunter, William Hurt and Albert Brooks. While I applaud (James L) Brooks for resisting the urge to turn one of the male leads into a “bad guy”, it’s rather difficult to root for either of them, nothing gets resolved, and I found that I didn’t particularly care how it ended, or which newsman Hunter picked. 7/10 stars.