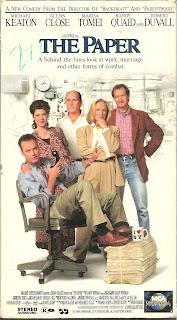 
Blurb From the VHS Jacket: “A behind-the-scenes look at work, marriage and other forms of combat.”


What Did I Learn?: A clipboard and a confident attitude will get you into any building in the world.


Really?: 1) So wait...Michael Keaton has a job interview with a rival newspaper (one that will provide more money and better hours at a time when he’s starting a new family) and he steals its front-page story? I have a hard time believing any sane individual would ever do that. 2) Aside from Fargo, has there ever been a film featuring a pregnant woman in which she doesn’t give birth?


Rating: I’m not a huge fan of Ron Howard’s films, but The Paper is a fun, engaging and surprisingly-well written semi-character-driven movie  about a day in the life of a New York tabloid. The Paper is strengthened by some wonderful performances: Keaton does a masterful job of holding everything together, Marisa Tomei is spunky and sexy even when her character is on the verge of giving birth, Randy Quaid and Robert Duvall are quite likeable, while Glenn Close nearly steals the movie as the bitchy managing editor with a heart of gold. I like this film, but the ending at the hospital seems a bit contrived, and I have a lot of trouble believing a guy on a job interview would rip off his potential employers. 8.5/10 stars.