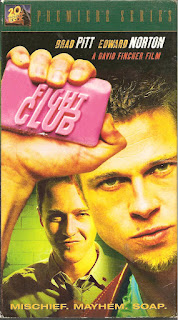 Synopsis: While I would love to post a synopsis, I’m afraid that Rules #1 and #2 prevent me from discussing this movie.


Blurb From the VHS Jacket: “A ticking time-bomb insomniac (Edward Norton) and a slippery soap salesman (Brad Pitt) channel primal male aggression into a shocking new form of therapy. Their concept catches on, with underground ‘fight clubs’ forming in every town, until a sensuous eccentric (Helene Bonham Carter) gets in the way and ignites an out-of-control spiral toward oblivion.”


What Did I Learn?: The best way to rid yourself of a troublesome extra personality is to, um... shoot yourself in the head and hope you don’t hit anything important.


You Might Like This Movie If: You’re determined to never again give Colgate-Palmolive another dime of your hard-earned money.


Really?: 1) See “What Did I Learn?”. 2) Gee...these guys pound the crap out of each other day in-and-day out, yet it’s funny how nobody dies (except for the dude who was shot by the cops), or suffers from serious brain damage from all that fighting. 3) I don’t want to give away any spoilers, but it’s also funny how nobody addresses Edward Norton’s character by the “wrong” name until near the end of the film.


Rating: Fight Club is an extremely imaginative, engrossing, funny, and visually stunning film with some very interesting insights into mass marketing, and the uncertain status of men in a soulless, “single-serving” world. (I’ve always found it funny how some Canadians will say they love Fight Club’s anti-corporate message, but then miss the fact that it’s also rather anti-feminist).  FC is an almost-great movie that’s a bit too long, and by the end it becomes increasingly difficult to suspend one’s sense of disbelief. 8.5/10 stars.