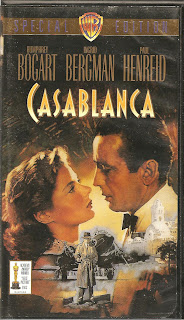 
Blurb From the VHS Jacket: “Casablanca: an easy city to enter, but a much harder one to leave, especially if your name is on the Nazis’ most-wanted list. And heading that list is Czech Resistance leader Victor Laszlo (PAUL HENREID), whose only hope is Rick Blaine (HUMPHREY BOGART), a cynical American who sticks his neck out for no one... especially Victor’s wife, Ilsa (INGRID BERGMAN), the ex-lover who broke his heart.”


What Did I Learn?: Casablanca isn’t so hot that you can’t wear suits and even trench coats everywhere you go.


You Might Like This Movie If: You never watched either the short-lived 1983 TV series, or this cinematic turd featuring Pamela Anderson (which I will NOT review, by the way).


Really?: 1) So wait – the letters of transit are signed by DeGaulle? How would they carry any weight in a Vichy France territory if he’s the leader of the Free French in exile? And if Vichy France is a fascist state, why couldn’t the cops simply pick up Laszlo and throw him in the slammer? 2) Does Captain Renault really need to throw a perfectly good bottle of Vichy water in the trash can to indicate his loyalties? 3) I don’t think I’d gamble another Franc at Rick’s if the roulette table somehow wound up with the number “22” twice in a row. 4) Are there any Arab characters in this movie? I don’t remember seeing any.


Rating: Casablanca is deservedly considered a film classic, although it drags as time goes by (sorry, I couldn’t resist), and the symbolism is rather heavy-handed. 8.5/10 stars.