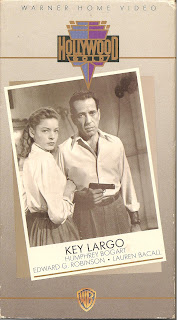 
Blurb From the VHS Jacket: “A hurricane seethes outside, but it’s nothing compared to the electrified atmosphere within the hotel at Key Largo. There sadistic mobster Johnny Rocco and his stooges hole up against the storm – and hold at gunpoint hotel owner Nora Temple, her invalid father-in-law and ex-GI Frank McCloud.”


What Did I Learn?: If you and a several innocent guests are being held hostage in your own hotel by a bunch of trigger-happy gangsters, you might wish to keep your mouth shut, and refrain from repeatedly calling the boss “filth”.


Really?: 1) So, Johnny Rocco (Edward G. Robinson) hands McCloud (Bogart) a gun and offers McCloud a chance to kill him at the cost of his own life, and all of the hostages egg McCloud on to start blasting? No fucking way that would ever happen – I’m calling “bullshit”. 2) How did those other bad dudes somehow make it from the southern-most tip of Florida into Georgia by the end of the movie?


Rating: Adapted from a stage play, Key Largo is a tense psych-drama with a number of memorable performances; while it’s remembered (especially by Bertie Higgins) as a Bogie-and-Bacall picture, Robinson, and to a lesser degree Lionel Barrymore totally steal the show. My big complaint would be that I had trouble believing certain characters would act the way they do: in real life, hostages don’t throw gratuitous insults at their captors –that’s ridiculous. 7/10 stars.