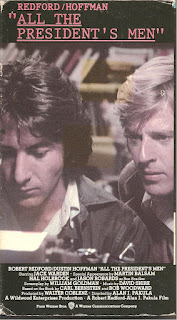 Salute to Journalism Movie #4 (A bit of trivia: the 40th anniversary of the Watergate break-in falls on June 17th of this year).


Blurb From the VHS Jacket: “Bob Woodward and Carl Bernstein, two young Washington Post reporters, picked up the Watergate story from the beginning. They stayed with it, through doubts, denials, discouragements. Gradually they saw where the trail led – and they got scared. All the President’s Men is their story.”


What Did I Learn?: If a potential source of information is nervous, and reluctant to spill the beans about a major conspiracy, a little stalking and harassment will work wonders.


Really?: This category doesn’t really apply, as the film is a true story and almost non-fiction, but I have to wonder: All the President’s Men is 135 minutes in length, and yet we learn nothing about either Bob Woodward or Carl Bernstein (to say nothing of Nixon or his cronies) as characters.


Rating: All the President’s Men is a smart, well-written account of the Washington Post’s investigation of the Watergate scandal. It’s probably the most realistic of the Salute to Journalism movies I’ve reviewed, and well worth watching: Redford and Hoffman deliver terrific performances, and the scenes of Woodward/Redford meeting Deep Throat/Hal Holbrooke are genuinely paranoid and spooky (and later copied in any number of movies and TV shows, including The X Files). My only complaint would be that the movie focuses entirely on the chase and doesn’t offer a lot of insight into Nixon's cabal or the reporters who broke the story. While Woodward is told at one point that their lives are in danger, not much actually occurs in this film, so a bit more character development would be nice. 8/10 stars.