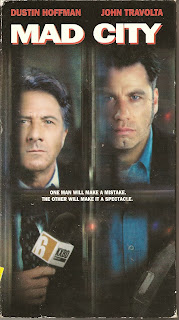 Synopsis: It's Dog Day Afternoon, except the hostage-taker has a communications strategist.

Blurb From the VHS Jacket: “A freeway pursuit. A domestic spat gone over the edge. You’re watching it live at home, news as it happens. But wait a minute. Is the reporter on your TV screen shaping the story, extending its life, making it happen? Dustin Hoffman and John Travolta team with award-winning filmmaker Costa-Gravas (Z, Missing) in a fierce tale of ratings-driven news gone mad.”

What Did I Learn?: Fellas, if you take a whole bunch of small children as hostages, and you somehow receive some positive PR from a sympathetic TV news story, it’s a really good idea to surrender immediately afterward.

You Might Like This Movie If: You've always wanted to see Larry King conduct a tough interview (he does a cameo in the film).
Really?: I had a hard time believing Brackett (Hoffman) could simply walk back and forth between the museum and the outside world on a whim. I’m pretty sure that once a hostage is released, the cops would never allow that person to walk back into a dangerous situation.

Rating: I’m not a huge fan of hostage-taking movies, but Mad City is an enjoyable melodrama featuring good performances from Hoffman and Travolta. Aside from the credibility of its script, however, (see: “Really?”), Mad City’s biggest problem is that while it tries to satirize the world of 24-Hour TV news, it’s often too heavy-handed, and it’s not a terribly funny film. Oh, and the ending is an unexpected downer. 6/10 stars.