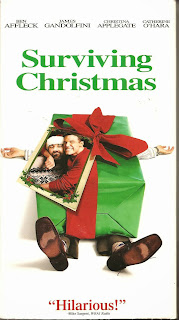 Synopsis: Dysfunctional American family experiences true Christmas miracle: a rich, obnoxious douchebag moves into their home and offers them cash if they agree to humiliate themselves.

Blurb From the VHS Jacket: “It’s madness, mischief and mayhem when rich executive Drew Latham (Ben Affleck) decides to rent himself a family for the holidays. Tired of spending Christmas alone, Drew makes the Valcos (James Gandalfini, Christina Applegate and Catherine O’Hara) an offer they should have refused.”

What Did I Learn?: Apparently, money can in fact buy anything.


Really?: Gee, I dunno... how about the entire premise of this movie?

Rating: As a fan of James Gandalfini and his work in The Sopranos, I wanted to like Surviving Christmas a lot more than I did. While it has a few amusing lines, it’s not a terribly funny movie, and the buildup we expect – a confrontation between Gandalfini and Affleck never happens; instead, the movie shifts gears and we’re given a sappy – and highly unlikely romance between Affleck and Applegate. Surviving Christmas could have been a much better film if the script had gone through a re-write or two. 5.5/10 stars.