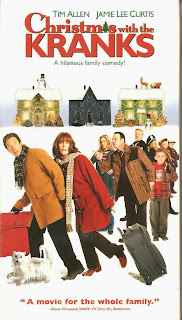 Synopsis: Rugged individualist couple decides to save a little money and defy the will of their ultra-conformist neighbours... um... until they see the error of their ways.

Blurb From the VHS Jacket: “When their only daughter Blair leaves the family nest, Luther and Nora Krank (Tim Allen and Jamie Lee Curtis) decide to book an island cruise to beat the yuletide blues and just skip the holidays. But their decision to boycott tradition has the whole neighbourhood in an uproar.”

What Did I Learn?:  Smoked trout is a poor substitute for turkey or hickory ham.


Really?: 1) It’s implied that Luther Krank is a lawyer in a high-powered Chicago firm. I had a great deal of trouble believing he would purposely hose down his front lawn in order to injure any carollers. Wouldn’t he have heard the term “slip and fall” in law school? 2) I’m not Catholic myself, but I strongly suspect that most Catholic priests are a little too busy on Christmas Eve to attend any parties. 3) So wait – the Kranks spent over $6,000 on Christmas the previous year? How is that possible? 4) I’m pretty sure that a lawyer in a big firm would realize that sending out a memo instructing his co-workers that he is skipping Christmas might be considered a career-limiting move. 5) I’m sorry, but any normal people would calmly explain the situation to their daughter, and here’s an idea – how about meeting her and Enrique in Miami?

Rating: Considering this film was based on John Grisham’s novel “Skipping Christmas,” I can only assume that something got lost in the adaptation, because Christmas With the Kranks is awful. CWTK is billed as a comedy, but it isn’t funny – not once. And what exactly is the message behind this film: obey the General Will of your neighbours, and don’t even think about doing your own thing? Frankly, I’m not sure which segment I disliked more: the first two acts when the Kranks boycott Christmas and their neighbours harass them relentlessly, or the last 40 minutes, when Luther and Nora change their minds and everything gets mushy. Ugh. 3/10 stars.

Would It Work For a Bad Movie Night?: No, but take a drink every time Jamie Lee Curtis freaks out.