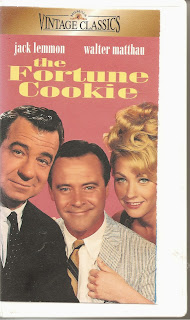 Synopsis:  Network cameraman fakes an injury on the football field, and... zzzzzzzzzzzzzzzz

Blurb From the VHS Jacket: “Harry Hinkle (Jack Lemmon) is one lucky guy! When he’s accidentally clobbered by a 220-pound halfback, all Harry suffers is a slight concussion. All, that is, until Whiplash Willie (Walter Matthau) – a legal scoundrel of the first order – arrives on the scene!”

What Did I Learn?:  If you’re pretty sure a scummy private eye is filming you from across the street, you might want to keep the curtains closed.

You Might Like This Movie If: You figure it must be a two-hour-long infomercial for this.
Really?:  1) First of all, I’m guessing that “Boom Boom” has been playing football for a number of years, and would have come to the realization that people sometimes get hurt during games in his teens. More importantly, Boom Boom doesn’t know that Harry is faking, so it seems incredibly reckless of Harry to accept Boom Boom’s offer to play nurse/butler/cook for long stretches of time. Come to think of it, couldn’t Boom Boom have simply hired somebody to help out Harry? He’s a pro football player, for crying out loud! 2) Wow.... they were still making black and white movies in 1966? 3) So, Harry spends what – weeks in a wheelchair, and then decides to throw it all away when he’s clearly goaded into anger by a scummy private eye? 3) It seems to me that the NFL/Cleveland Browns/CBS would have realized years earlier that football is a violent game, and might have prepared some sort of action plan in advance – maybe getting the cameramen to sign waivers? At the very least, I imagine a lawyer for the big corporations would show up fairly soon afterwards with a big cheque. 4) Um... Willie and Harry are ok with the scummy private detective illegally bugging and filming Harry’s apartment? Couldn’t Willie have gone to the press with this information, or tacked on a harassment charge, or something? (See: “What Did I Learn?”)

Rating: I wanted to like The Fortune Cookie a lot more than I did; while Matthau delivers a wonderful performance as slippery lawyer Willie Gingrich, he’s off-screen for long stretches of the film. Without him, and when the focus becomes milquetoast Harry in a wheelchair, The Fortune Cookie gets boring, quickly. (See: "Synopsis"). Oh - and it doesn’t help that it gets increasingly difficult to believe certain plot points. This was the first Lemmon-Matthau collaboration, and in my opinion, it’s also the weakest. I cannot recommend this movie. 5/10 stars.

Would it Work For a Bad Movie Night?: No, but take a drink every time Matthau says “will you relax?”, or some variation of that message.