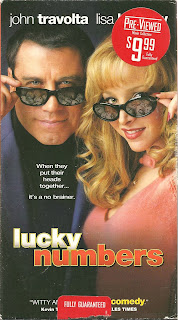 Interestingly, both Lucky Numbers and Diamond Men are set in Central Pennsylvania (essentially the Harrisburg area... this is just a coinky-dink – I’m not doing a Central Penn theme). Oh – and Lucky Numbers is also set around Christmastime, although I don’t consider it to be a Christmas movie.

Blurb From the VHS Jacket: “John Travolta ‘is truly irresistible’ as Russ Richards, a weatherman in Harrisburg, Pennsylvania. Russ is a local celebrity, but when an unusually mild winter causes his snowmobile dealership to take a plunge, Russ needs a get-rich quick scheme –and fast. With is greedy girlfriend (Lisa Kudrow) – the TV station’s lotto-ball girl- and a criminally minded buddy (Tim Roth), Russ hatches a plan to fix the lottery.”

You Might Like This Movie If: You know that anything can happen during a lottery draw.
Really?: Hold on – Dick Simmons (Ed O'Neill) has both the winning ticket and enough evidence to put Crystal behind bars if she complains, and yet he agrees to give her half the money? No way.