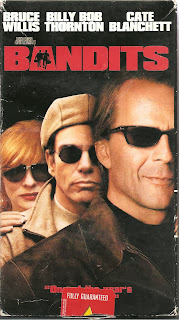 Blurb From the VHS Jacket: “Busting out of prison, Joe (Bruce Willis) and Terry (Billy Bob Thornton) are on the run and out of money. That chances when they devise a scheme to place bank managers under house arrest the night before they rob their banks.”

What Did I Learn?: Bonnie Tyler’s Total Eclipse of the Heart is the “ultimate sappy chick song.”

You Might Like This Movie If: You appreciate a spicy love triangle... or just a triangle.
Really?: 1) Wow – Joe and Terry patch up their differences pretty quickly after Kate informs them she’s leaving, don’t they? 2) You know – not that many men would go along with sharing a girlfriend. 3) Hmm.... so, the phony EMT paramedics show up on the scene, and nobody checks their credentials? And they’re able to shove the money inside the body bags with Joe and Terry? 4) Hold on – why do Joe and Terry insist upon wearing silly disguises when they’re robbing banks? They’re escaped fugitives, and therefore already wanted by the cops.

Rating: Bandits starts out well as a high-spirited crime caper before it gets bogged down in a love triangle storyline that soon overshadows everything else. The film has its moments of hilarity, and the three leads work well together, but it's all pretty forgettable. Still, I have to give Bandits an extra half-star for Thornton’s fine performance as neurotic hypochondriac Terry. 6.5/10 stars.