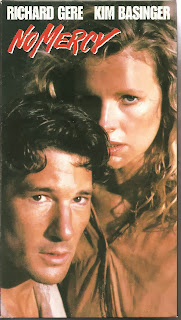 Synopsis: Hmm... tough urban detective travels to a strange city after his partner is mysteriously murdered, and harasses rich guy with funny European accent... oh my God, it’s Beverly Hills Cop, except Axel Foley is white, he never once cracks a joke, and most of his time is spent running around a swamp, handcuffed to a hot illiterate chick!

Blurb From the VHS Jacket: “Richard Gere and Kim Bassinger sizzle in a searing action thriller of passion and murder, NO MERCY.”

What Did I Learn?: According to tough Chicago cop Eddie Gilette (Gere), every hooker has a hard-luck story, and the secret to Heaven is “a girl with freckles on her tits.”

You Might Like This Movie If: you want to see a tough guy kicking ass in the Louisiana bayou... and you love the word "Mercy."
Really?: 1) Considering the villains are all either Cajun cowboys, or black dudes, I have to say that Losado (Jeroen Krabbe) looks a wee bit out of place with slicked-back hair and a shoulder-padded trenchcoat he never once removes. Oh, and he can bust through walls?!?! 2) Holy shit, how many times does Kim Bassinger scream?  3) So, Gilette's boss simply hands him a suitcase filled with firearms and basically tells him to have fun?

Rating: For an action-thriller, No Mercy is pretty thin on plot – it starts out with a great premise (a couple of Chicago cops bust a drug dealer, and then pretend to be Windy City hitmen), and pretty quickly degenerates into a whole lot of Gere and Bassinger running away from bad guys as the leading lady screams her head off the entire time. That said, the two leads share some undeniable energy, and the film delivers some decent action sequences. 6/10 stars.