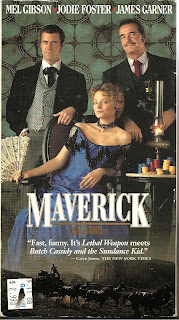 Happy New Year, Everyone! At some point soon, I will compile my annual list of the Best and Worst films I reviewed in the previous year. In the meantime, here are a few Westerns featuring Hollywood’s most likeable actor, James Garner.

Blurb From the VHS Jacket: “Ante up – for laughter and action aplenty! Mel Gibson is sly gambler Bret Maverick, Jodie Foster is a charming scam artist, and James Garner (the original Bret Maverick, from the Emmy-winning TV series) is a laid-back lawman in Maverick, the crowd-pleasing hit that deals you a winning hand.”

What Did I Learn?: If you see someone sprawled out, apparently unconscious, by the side of the road, you’re an idiot if you stop to help.

You Might Like This Movie If: You really, really like the word "Maverick."
Really?:  1) So wait – Maverick starts out in the desert (Monument Valley, Arizona?), winds up somewhere in the Rockies, makes it back to a desert setting, and somehow gets to St. Louis, Missouri, all in the course of three days? 2) Wow – it’s rather convenient that Angel (Alfred Molina) is not only the roughest, toughest, meanest hombre this side of the Pecos, but he’s ALSO a great card player, isn’t it? 3) I won’t reveal the surprise at the end regarding Maverick’s relationship to Cooper (Garner), but it sort of contradicts some of the earlier scenes; I had a hard time believing Cooper wouldn’t lift a finger to help Maverick on the runaway stagecoach, for instance.

Rating: Maverick is a funny and light-hearted Western that’s quite enjoyable as long as you don’t take it too seriously. Gibson enjoys some great chemistry with Foster and Garner (the verbal pot-shots they take at each other are half the fun) and the film is chock-full of cameos. My only complaints would be that the script has a tendency to meander (the scenes involving the Russian Archduke and the Indians are a bit silly and don’t exactly fit the rest of the film), and it’s a tad too long – I could have done without the needless tension of seeing Maverick getting locked in his riverboat stateroom, and then making the last game in the nick of time. 8/10 stars.