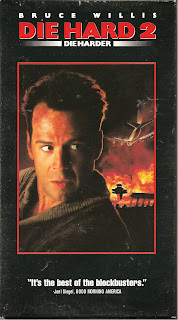 Blurb From the VHS Jacket: “On a snowy Christmas Eve in the nation’s capital, a team of terrorists seize control of a major international airport. They’ve prepared for every contingency except one: John McClane, an off-duty cop experiencing deadly déjà-vu.”

What Did I Learn?: If you really need help from the chief of security at a major airport, your best course of action is to: 1) ask if he needs a “slide rule” to figure out a relatively simple problem, 2) suggest that his salary should consist of no more than $1.98 per month, 3) call him a “fat fuck”, and 4) pose the following question: “What sets off the metal detectors first? The lead in your ass or the shit in your brains?”

You Might Like This Movie If: You enjoy the home-spun wisdom of Fred Dalton Thompson (the dude who says: "stack'em, pack'em, and rack'em.")


Really?: 1) I realize this movie was released 11 years before 9/11, but come on – the old lady was allowed to bring a TASER on board an airplane in her carry-on luggage? 2) Out of all the airplane windows Thornburg (William Atherton) could use, why would he choose the one window that would force him to speak to Holly McClane? 3) So let me get this straight...  John McClane is on vacation and far outside his jurisdiction, and yet he decided to bring his pistol with to pick up his wife from the airport? Ok, maybe... but why would he bring, what – 17 clips of ammunition?!?! 4) I’m pretty sure that if somebody pointed a sub-machinegun filled with blanks at an airport’s chief of security, and then started shooting, the other officers on duty would probably waste the guy in a North York minute. 5) Hold on – we’re supposed to believe that planes circling Dulles International Airport in Washington DC couldn’t simply land at National (now Reagan National) Airport, or in Baltimore or Philly? And we're also supposed to believe the tower had no other way to communicate with the already airborne planes? How about using the transmitter in one of the grounded jets? 6) Apparently, a NYC/LA cop is tough enough to beat Army Special Forces personnel (who have presumably been trained in a variety of martial arts) in hand-to-hand combat, even if the guy has a knife. 7) Funny how Trudeau and the others allow McClane to sit in on a lot of top-level meetings even though he has absolutely no business being there.

Rating: It’s funny – when I first saw Die Hard 2 in the theatre, I quite enjoyed it. Since then, however, this movie seems to get worse with every subsequent viewing. While the first Die Hard was – and still is – a tense, edge-of-your-seat action thriller, Die Hard 2 is tedious, riddled with plot holes, and just a bit too long. The movie consists of John McClane mouthing off to anyone in a position of authority (meanwhile, his wife throws gratuitous insults at the slimy reporter from the first film), and then always knowing exactly where to find the villains to engage in a shootout. Die Hard 2 features some cool (if implausible) action scenes, but by the end, I didn’t really care. 5.5/10 stars.