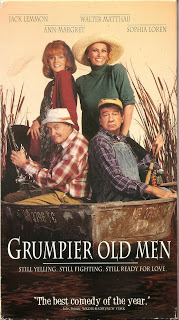 Blurb From the VHS Jacket: “The more things change, the more they hilariously stay the same in Wabasha, Minnesota.”

What Did I Learn?:  Smoking lots of cigarettes, eating nothing but bacon, and drinking your dinner every night will allow you to live to the ripe old age of 95 – but no older.

You Might Like This Movie If: You love the idea of cashing in on an ill-conceived sequel.
Really?: 1) So, are the Gustafsons Lutheran? Is Max Goldman Jewish? Are the Ragetis Catholic? I realize we live in a fairly secular age, but I imagine folks might take religion a bit more seriously in small town Minnesota than in Hollywood. 2) Um... what was the point of killing off Burgess Meredith’s character? He’s the funniest dude in this film. 3) So, did the restaurant take off? Did it flop? This plot point is introduced early on, and everyone seems to promptly forget about it. 4) Um... Goldman has a video camera pointed into Gustafson’s living room, and he tapes his buddy as he poses nude for a sculpture? Gee... that’s just plain creepy.

Rating: Grumpier Old Men is essentially a rehash of Grumpy Old Men (see “Synopsis”) with slightly more colourful scenery and a hot, older chick for Matthau. It’s not quite a bad movie, but we’ve seen it all before, right down to the 20-minute segment when the two Grumpies even suspend their friendship and return to playing pranks on each other; heck, Lemmon and Matthau even briefly revisit their Odd Couple fame when Gustafson moves in with Goldman for a few hours. I’m going to deduct half a star for a lack of originality. 5.5/10 stars.