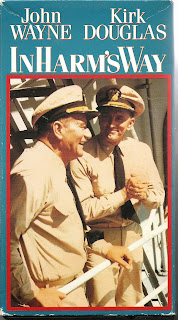 December 7: a day that will live in infamy! Please click the links to read my review of Tora! Tora! Tora!, as well as that other John Wayne/Kirk Douglas collaboration, The War Wagon.

Synopsis: Hmm.... a star-studded, but overly long drama about the War in the Pacific... the hero is a macho Republican who plays a senior officer that doesn’t get along with his estranged son, who is also in uniform... oh my God – it’s Midway, in glorious black and white!

Blurb From the VHS Jacket: “Producer-director Otto Preminger’s epic treatment of the bombing of Pearl Harbour details the devastating sneak attack on the Naval base as well as the explosive behind the scenes stories.”

What Did I Learn?:  According to Burgess Meredith, by the early 1940s, American women were: “smokin' cigarettes, drinkin' whiskey, doin' the shimmy-sham-shimmy, hot damn!”


Really?: 1) So wait – the obviously troubled, but super-cool and likeable Commander Eddington (Kirk Douglas) winds up raping a young girl? And Rock Torrey’s (John Wayne) asshole son does a face-turn and winds up being a nice, young man and a real American hero? What the fuck? 2) Funny how the scummy Commander Neal Owynn simply fucks off after Eddington slaps him. Come to think of it, Admiral Broderick doesn’t give Torrey any real trouble either, even though that’s what the audience has been expecting. 3) Wow – they were still making black and white films in 1965? 4) If this film depicts the battle for Guadalcanal, in the Solomon Islands, why the made-up names? What's that about?

Rating: Generally speaking, I’m not crazy about John Wayne’s non-Westerns (I think he was terrible in The Longest Day), but he delivers a pretty good performance in In Harm’s Way, and he enjoys some nice chemistry with Meredith, Douglas, Henry Fonda, Carroll O’Connor, as well as romantic chemistry with Patricia Neal. Unfortunately, at 165 minutes, the movie is far too long (the sub-plot involving Mac McConnel should have been axed), the political/bureaucratic issues facing Torrey simply melt away, and by the third hour certain characters seem to adopt entirely different personalities. Meh. 6/10 stars.