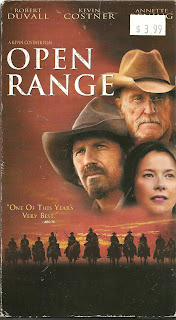 I’m not starting a Robert Duvall Western theme – it just sort-of worked out that way.

Synopsis: Hardscrabble free-graze cattlemen fight injustice in the Old West by... um... assaulting the local sheriff with chloroform, turning the town into a shooting gallery, and icing an entire army of hired thugs?

Blurb From the VHS Jacket: “Packed with epic action, Open Range is a powerfully gripping store that’s never been told until now, and stars Academy winners Robert Duvall (John Q) and Kevin Costner (Tin Cup), and Academy Award nominee Annette Benning (American Beauty). A group of free grazers, four men trying to escape their pasts, are driving cattle and living off the land on the open range – a place where nature makes the only laws. When a ruthless, evil rancher tries to run them out of town, the men’s peaceful existence takes a tumultuous turn and ends in the grittiest, most explosive gunfight on film as two men battle a town for honor, justice and a way of life that’s quickly disappearing.”

What Did I Learn?: There’s no better way to commence a shooting spree than to munch on some Swiss chocolate and fire up a fine, Cuban cigar.

You Might Like This Movie If: You'll watch anything that involves cow-pokes on the Open Range.
Really?: 1) They. Shot. The. Sheriff. Aren’t there any consequences for icing the local law-enforcement, even if he is a crooked bastard? 2) Gee...Baxter basically had our heroes beat the moment they let Mose out of jail. If he had actually given them a couple of days to get their herd moving, none of this would have happened – I guess some people have trouble taking “yes” for an answer.

Rating: Clocking in at 139 minutes, Open Range is a long movie that takes a loooooooong time to get going, but Costner and Duvall work well together, the film is well-written, and the climactic shoot-out is quitespectacular. Highly recommended. 8.5/10 stars.