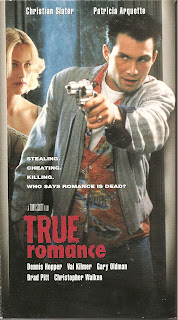 
Blurb From the VHS Jacket: "Stealing. Cheating. Killing. Who says romance is dead?"


What Did I Learn?: 1) Every pimp in the world ends up getting shot, and the cops don’t give a crap. 2) A man has 17 facial expressions that reveal he’s lying, while a woman has 20.


You Might Like This Movie If: You've always wanted to know how to negotiate a big-time drug deal.


Really?: 1) Even if I had just committed a double-murder and I needed to get the fuck out of Dodge, lickity-split, I’m pretty sure I would remember to pick up my wallet. 2) Related point: doesn’t Clarence (Christian Slater) realize he’s left his wallet and driver's license behind? I’m not sure it’s a great idea for him to visit his old man, let alone leave him a forwarding address in California. 3) You know, for a nerdy guy who spent most of his adult life working in a comic book shop, Clarence is a pretty tough customer. 4) Wow...neither Clarence nor Alabama (Patricia Arquette) seem terribly troubled about killing people or selling a fortune in drugs. 5) Wouldn’t Vincenzo (Christopher Walken) realize Clifford (Dennis Hopper) is obviously baiting him to take out his gun and kill him so Clifford doesn’t have to betray Clarence under torture? 6) So, Samuel L. Jackson is in this movie for what...three seconds?


Rating: I have slightly mixed feelings about True Romance. Slater and Arquette share some undeniable on-screen chemistry, and the movie provides some genuine laughs and thrills before it ends in a spectacular three-way shootout between the mob, the police and Lee Donowitz's hired goons. Unfortunately, the fun, road-picture feeling of True Romance is on several occasions marred by some extremely brutal violence, and I had a LOT of trouble buying Clarence's transformation from nerdy comic store geek into some tough guy who knows the ins and outs of setting up a major cocaine deal. True Romance was based on a very early Tarantino script, so it's interesting to hear phrases and lines of dialogue that made it into his other films; heck, Clarence and Alabama seem an awful lot like Ringo and Yolanda from Pulp Fiction.  8/10 stars.