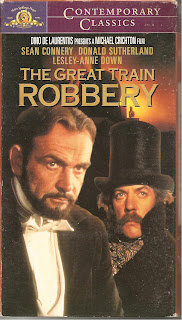 As a movie buff, and a fan of his television and print reviews, I was saddened to hear that legendary film critic Roger Ebert passed away earlier today. RIP.


Blurb From the VHS Jacket: "All aboard for runaway action and suspense in this riveting masterpiece from writer/director Michael Crichton! Starring Sean Connery, Donald Sutherland and Lesley-Ane Down, it's a "spine-tingling and suavely performed adventure (The Hollywood Reporter) based on history's first train robbery."


What Did I Learn?: A dead cat smells pretty bad.


You Might Like This Movie If: You know that train robberies were a lot more civilized in 1855.