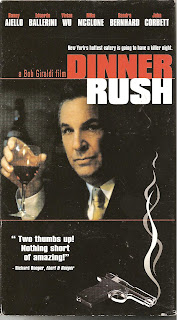 Synopsis: If you’ve ever wanted to see a cross-over between Gordon Ramsay’s Kitchen Nightmares and The Sopranos, this is your movie.


Blurb From the VHS Jacket: "Things are really heating up at New York's hottest restaurant. Owner and bookie Louis Cropa (Danny Aiello) lost a friend to a mob hit and now his chef's gambling problem has brought the unwelcome mobsters into his restaurant."


What Did I Learn?: If you're obnoxious enough, you can guilt-trip a maitre d into comping you a nice bottle of Brunello because you had to wait twenty minutes for a table.


Really?: 1) Um, I’m not entirely sure I buy the idea that in New York, a double murder in your restaurant will triple your business, but even if it’s true, wouldn’t it have still made more sense to whack the mobsters in Queen’s, or some other place with no connection to Louis? 2) So hold on... Gary (the accountant) is seen blocking access to the restaurant's bathroom when the hit takes place; he tells the detective's wife the ladies' room is out of order, when the clearly isn't true. Wouldn't he have some explaining to do, afterwards?


Rating: Dinner Rush is an enjoyable, and unfortunately overlooked film about an evening-in-the-life of a chic New York eatery. There isn't much of a plot to this movie (and in spite of the VHS blurb, it's hardly a gangster flick - most of the action revolves around Louis' relations with his two sons: the chef with dreams of owning the business, and the fuckup compulsive gambler), so much as a series of inter-connected storylines with a lot of witty and engaging dialogue thrown in. Aiello is quite good, and so are most of the other actors; my one complaint would be Sandra Berhard's performance. Wow...that woman just can't act! 8/10 stars.