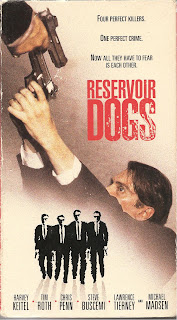 Tarantino Film Fest Movie #1 (While I’m not a fan of QT’s later films – Kill Bill, Django Unchained, Inglorious Basterds, etc... I DO like his early stuff, when he concentrated on snappy dialogue and clever storytelling.)


Blurb From the VHS Jacket: “They were perfect strangers, assembled to pull off the perfect crime. Then their simple robbery explodes into a bloody ambush, and the ruthless killers realize one of them is a police informer. But which one?”


What Did I Learn?: It’s not a great idea to pull a jewelry store heist with a psychopath. 2) Waitressing is the Number One job for non-college educated women in America. 3) Armed robbers have about four minutes between the time an alarm gets tripped and the time the cops show up.


You Might Like This Movie If: You know that great dialogue can be spoken by anyone and sound good.


Really?: 1) Is there a reason why these guys are all wearing identical black suits, white shirts and black ties? 2) Hold on – the cops are stationed less than a block away from the hideout, and they do nothing after they hear shots fired, and they know one of their guys is undercover? No way.


Rating: If there’s a quintessential “guy” movie, it would be Reservoir Dogs. The film is well-written, and jam-packed with suspenseful action and fine performances; Harvey Keitel and Steve Buscemi especially stand out. Reservoir Dogs isn’t always an easy movie to watch (thanks to Michael Madsen, I’ll always associate Stealers Wheel’s “Stuck in the Middle” with brutal torture), but it is quite good. My only complaints would be that all of the characters sound like variations of Tarantino, and the second "Really?" 8.5/10 stars.