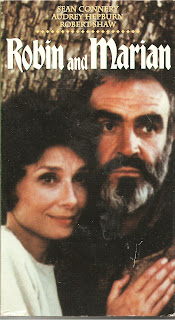 Sean Connery Historical Fiction (1199 AD) Film Fest Movie #4 (This film reunites Connery not only with Richard Harris from The Molly Maguires, but also Robert Shaw, who played the evil SPECTRE agent Red Grant in From Russia With Love)


Blurb From the VHS Jacket: “The legend of Robin Hood continues in this high-spirited adventure. Many years have passed since Robin (Sean Connery) led the fight for the poor people of Nottingham. Now, he and Little John return from the Crusades under the command of King Richard the Lionheart (Richard Harris). But when Richard is accidentally slain, the mad King John assumes the throne and Robin regroups the members of his old Sherwood Forest band.”


What Did I Learn?: Hunting for Robin Hood through Sherwood Forest while wearing heavy battle armour isn’t such a hot idea.


You Might Like This Movie If: You admire a hero who’s all about serving humanity, not cashing in or making dough.


Really?: Robin Hood – an outlaw – signs up to become Richard the Lionhearted’s flunkey for the Crusades? Isn’t that a bit like the Fonz going to Vietnam?


Rating: I have mixed feelings about Robin and Marian; in many respects it’s a fun, but beautiful movie about getting older and facing death; the musical score is lovely and elegiac, and the film features fine chemistry between Connery and Audrey Hepburn as the title characters. Robin and Marian is a nice little movie, but I kept asking myself: “do I really want to see this?” Do I really want to see Robin Hood get winded after a swordfight? Do I really want to see the legendary bandit display some stunningly bad judgement and get most of his Merry Men killed off as he pursues a woman who was a nun for the past 20 years? It’s all a wee bit depressing by the end. Oh – and watch for an excellent performance by Robert Shaw as the world-weary, and not-so-bad Sheriff of Nottingham; Shaw is one of the most likeable, and noble villains I’ve ever seen in a movie. 8/10 stars.