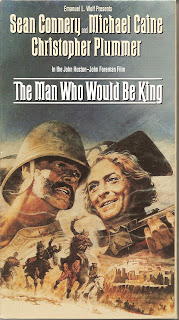 
Blurb From the VHS Jacket: "They rarely make them this way anymore - but they should. Based on a Rudyard Kipling story and packed with spectacle, humor, excitement and bold twists of fate, John Huston's film of The Man Who Would Be King earns its crown as one of the greatest screen adventures."


What Did I Learn?: 1) I can’t think of a single movie that does a better job of providing a concrete example for the old adage: "quit while you’re ahead." 2) Englishmen are the next best thing to gods. 3) Given a chance to think twice, it’s "not bloody likely" a soldier would give his life for Queen and country.


You Might Like This Movie If: You believe everyone should be given the chance to wear a crown.


Really?: 1) Um, isn’t it made fairly clear when Daniel meets Roxanne that the locals believe there’s no possible way a god can have sex with a mortal? Wouldn’t this have registered in his mind, and wouldn’t Peachy or Billy Fish have warned him of this danger? 2) See “Synopsis”.  3) Avalanches are apparently far more useful than dangerous.


Rating: The Man Who Would Be King is adventure with a capital A. While the film is a wee bit implausible in places, and about 15 or 20 minutes too long (which is why I can’t give it a full 10 out of 10 stars), Connery and Caine share some amazing chemistry together, and the storyline never once fails to hold the viewer’s interest. Highly recommended. 9/10 stars.