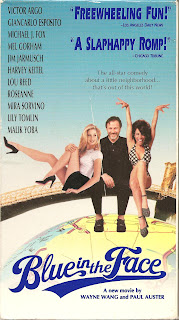 Smoke / Blue in the Face Double-Feature!


What Did I Learn?: 1) Very few people will name their price to eat a piece of shit. 2) Roseanne really can’t improvise a performance. 3) A trip to Brooklyn wouldn't be complete without taking in a Belgian waffle.


You Might Like This Movie If: You know that improvisation isn't for everyone. Nope, it sure isn't...


Really?: So wait... a little piece of the neighbourhood will die if Vinnie sells the smoke shop? Isn’t smoking really bad for one’s health? And who’s to say the locals wouldn’t congregate around the proposed vegetarian restaurant/health food store?


Rating: Blue in the Face is essentially an improvised follow-up movie to Smoke, featuring many of the same characters and actors; it’s a shame that William Hurt wasn’t available, but Keitel is outstanding as Auggie Wren. Blue in the Face is a lot funnier than Smoke – one of the best sequences features a whacked-out Michael J. Fox shooting the shit with a bemused Giancarlo Esposito -  but some of it works and some of it really doesn’t: Roseanne acts like she’s on an especially bad episode of Who’s Line is it, Anyway?  Smoke is a much better film, but check out Blue in the Face for a few laughs, and watch for a very sexy performance from Mel Gorham as Auggie’s long-suffering girlfriend, Violet. 7/10 stars.