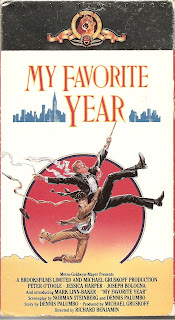 Synopsis: Ok, start with Scent of a Woman; replace Pacino and Chris O’Donnell with Peter O’Toole and Cousin Larry from Perfect Strangers, and then re-write the script into a two-hour episode of Happy Days.


Blurb From the VHS Jacket: “The immediacy of live television explodes with an intensity unknown in today’s world of video retakes and canned laughter.”


What Did I Learn?: 1) Ladies are “unwell”, gentlemen vomit. 2) It takes two days to prepare Meatloaf Mindanao. 3) According to the protagonist: “Jews know two things: suffering, and where to find great Chinese food.” 4) According to the movie star: "women love to be intrigued. They enjoy unraveling the mystery that is man, but you must allow them the freedom to discover you."
You Might Like This Movie If: You really want to see Peter O’Toole bombed out of his gourd for an hour and a half.


Really?: Hold on...the veteran movie star is afraid of performing in front of an audience? And he only realizes he’ll be on live television ten minutes before his scheduled debut? Give me a break...


Rating: My Favorite Year enjoys a 100% Fresh rating at rottentomatoes.com, and a fairly high grade from imdb.com, so maybe I’m missing something, but I couldn’t stand this film. Everyone wildly overacts, the script tries too hard to achieve wacky, screwball humour, and yet it falls flat, and the whole thing looks and feels like an overly-long sitcom. A perfect example: at one point, a huge lamp crashes on stage and nearly kills King Kaiser (Joseph Bologna in a role that’s obviously patterned on Sid Caesar); I would have expected him and the camera to look upwards, to determine if it was an accident or not, but the shot never comes. Peter O’Toole provides an impressive, tour-de-force performance that deserves a few stars, but My Favorite Year is loud, unfunny, and poorly written. I cannot recommend this movie. 4/10 stars.