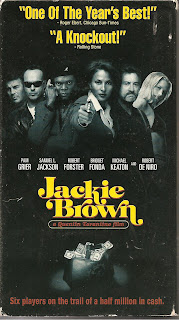 
Blurb From the VHS Jacket: "Pulp Fiction director Quentin Tarantino ignites the screeen with a sizzling all-star cast that's sure to please! ... Combining an explosive mix of intense action and edgy humor, Tarantino scores again with the entertaining Jackie Brown!"


What Did I Learn?: 1) A good cop will never let you know he knows you’re full of shit. 2) Back in 1995, it was possible to have your own apartment in L.A. while earning the princely sum of $16,000 a year. 3) The AK-47 is “the very best [firearm] there is…. when you absolutely, positively got to kill every motherfucker in the room.”


Really?: 1) If his plan is to open the trunk and kill Beaumont, why in the world would Ordell give him a shotgun to hold in the meantime? 2) I realize Louis isn’t the sharpest knife in the drawer, but I had a great deal of trouble believing he would shoot Melanie in a crowded parking lot simply because she likes to nag…or that Ordell would shoot Louis when the latter is driving on a city street! 2) Melanie and Simone are quite attractive, and I can see why Ordell would provide each of them with their own place, but Sheronda? Yeesh...


Rating: Jackie Brown is one of the only Quentin Tarantino films that’s based on a pre-existing script, and it shows: the movie is enjoyable, but clearly doesn’t have either the panache or the snappy dialogue of Pulp Fiction or Reservoir Dogs. Pam Grier and Samuel  L. Jackson are quite good as Jackie and Ordell (Robert Forster is ok as Max Cherry, while De Niro does his best with a limited part), but the movie drags in places and never really gets going – it’s all atmosphere, and an endless series of forgettable meetings. 7/10 stars.