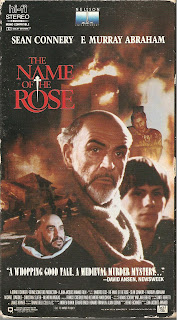 
Blurb From the VHS Jacket: “one monk has fallen (or was he pushed?) from a tower, another is found head-first in a vat of pigs’ blood. Are these the works of the devil, whisper the other monks, is this the Apocalypse? Visiting Brother SEAN CONNERY, investigating the deaths, discovers a secret library containing rare books considered lost to the world and dangerous to the Catholic faith.”


You Might Like This Movie If: You think Brother Jorge was right...comedy is bad news. Baaaaaaaaad news!


Really?: 1) Gee...who knew that an elderly,  blind monk could cause so much destruction at the end of the movie? 2) Were there that many black monks in Northern Italy in 1327? Considering the man’s race was never an issue in the storyline, I have to wonder about that particular casting decision. 3) I have to wonder: why didn’t Brother Jorge simply burn Aristotle’s book on comedy if he thought it was so darned dangerous to the world? 4) Um...I really didn’t need to hear Salvatore (Ron Perlman) scream in pain over and over again.


Rating: The Name of the Rose is a creepy, and incredibly compelling film that works both as a Whodunnit , and as an historical drama. Connery is at the top of his game as a 14th Century Sherlock Holmes (William of Baskerville actually says “elementary” at one point!) with a genuine love for books. My only complaint would be that The Name of the Rose simplifies, and glosses over some of the story from Umberto Eco’s brilliant novel; Bernardo Gui’s (F. Murray Abraham) persecution of the former radicals has a profound impact on the debate that takes place at the abbey alongside the murders – was that a conscious decision on his part, or is he simply a paranoid, religious zealot without a dog in the fight between the Franciscans and the Papacy? Still, highly recommended. 9/10 stars.