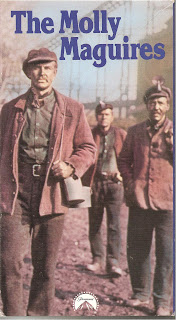 
Blurb From the VHS Jacket: "The Molly Maguires was a secret society of militant coal miners who battled their exploitation by mine owners with violence, intimidation, and sometimes murder. Based on actual events, this gripping story is a sympathetic and accurate account of the Irish-American miners' struggle."


What Did I Learn?: Apparently, a tough Irish-American detective can withstand occasional sharp blows to the head without ever suffering from a concussion.


You Might Like This Movie If: You enjoy watching working-class Americans pitted against each other...as well as the name "Molly".


Really?: Um...how just many crimes does McParlan/McKenna (Richard Harris) commit while he’s undercover with the Molly Maguires? That was always a big deal in films like Donnie Brasco. 2) Does McParlan/McKenna seriously think he’s going to sweep Mary Raines (Samantha Eggar) off her feet after she discovers: a) he’s been lying to her about his identity, and b) he sends a bunch of people in her community off to jail? 3) I had a hard time believing a violent secret society would recruit a dude they don’t know from Adam. 4) See What Did I Learn? (and McParlan takes those hits from his boss!)


Rating: I can’t say that I’m terribly fond of The Molly Maguires. While it’s not a bad movie by any stretch, and the production values are quite impressive, the biggest problems with The Molly Maguires are that it’s extremely slow-moving, and there aren’t any heroes. In mob-related films like the aforementioned Donnie Brasco, undercover agents usually feel pangs of guilt and remorse for stabbing their new-found friends in the back, yet the audience doesn’t feel terribly sorry for their victims because they’re violent gangsters. In The Molly Maguires, the miners are hard-working men trying to feed their families, and they have legitimate (or at least semi-legitimate) reasons for turning to violence; moreover, the cops actually assassinate both a Molly Maguire and his wife. The audience keeps waiting for McParlan/McKenna to have some sort of a change of heart, but it never happens. And leaving character development aside, there isn’t much suspense, either: Kehoe (Sean Connery) eventually finds out there’s a traitor in his group, and yet nothing ever comes from that discovery, and McParlan/McKenna never seems to get into any trouble he can’t handle.  6/10 stars.